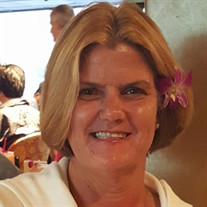 Laurie Jean Mac Millan/Miller was an adored daughter, mother, grandmother and friend. Her death on April 27th,2021 came as a sudden shock to everyone. Laurie was born to her parents on December 31st, 1965. Her father William and her biological Mother Sheri Mac Millan were the proud parents of this beautiful angel. When Laurie was just 2 years old, Sheri had passed away. With very big shoes to fill a woman named Martha Smalley, soon to become Martha Mac Millan, came into their lives. She stepped in as Laurie’s mother for the remainder of Laurie’s time with us. Laurie was born in San Bernardino and grew up in Winchester, California. Laurie went on to graduate from Hemet High School in 1984. While growing up Laurie played basketball, softball and played in her school band. Along with these sports she participated in many spelling bees, was a part of the FFA as well as the 4H club. Raising pigs, goats, cows, and horses, Laurie found her love for animals. Her talents were endless. After graduating from Hemet High, she attended Riverside community college and began working in Restaurant management field. Laurie was a mother of 3(Cassandra, Ryan, Carissa). Laurie was a strong individual had a battled and beat breast cancer. Laurie spent her time crafting, playing with her animals and loved watching soap operas, police chases, and baseball games! She was a big cat lover and such a kind, loving, friendly neighbor. She always wore a smile, saying hi to anyone we came across and always ran into someone she knew wherever she went. She meant the world to us. She is survived by her Mother (Martha Mac Millan) Aunt (Vera Jean) Aunt & Uncle (Larry & Debbie Watson) her Children (Cassandra, Ryan, Carissa) her Granddaughter (Levi) and her beloved pets… Dog (Bailey) Cats (Sylvester, Bear, Simba) Her life was short but as beautiful as she was. She will be loved and missed and remembered as the angel she was forever.

Laurie Jean Mac Millan/Miller was an adored daughter, mother, grandmother and friend. Her death on April 27th,2021 came as a sudden shock to everyone. Laurie was born to her parents on December 31st, 1965. Her father William and her biological... View Obituary & Service Information

The family of Laurie Jean Miller created this Life Tributes page to make it easy to share your memories.

Send flowers to the Miller family.