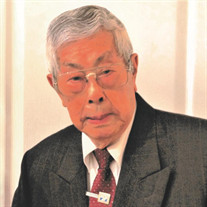 Khai Sein Wong at the age 96 years old, passed away peacefully and went to be with the Lord on August 6th, 2021 at his home in Murrieta, CA in the presence of his family. He was born on November 5th, 1924 in a small farming village of Yung Tin in Fujian, China. He was raised by his grandmother and mother after his dad passed away at an early age. He was the first from his village to attend a college and graduated from the Agriculture College of Fujian. He joined the military to serve his country. At the age of 25 years, he made a difficult and important decision to say goodbye to his beloved mother, grandmother and family and he immigrated to Burma during the rising power of the Chinese Community Army. He married Bee Tin Chwa on June 8, 1957 in Burma and they celebrated their 64th wedding anniversary this past June. They were blessed with three children, two daughters and one son. They lived in the cities of Bago, Yangon and Mandalay. He was a regular member of the Methodist church where he experienced spiritual growth and was one of the founding members of the Christ Methodist Church in Mandalay. In Burma he was a teacher, a principal and then became a successful business owner in his photo studio and department store. However, with the change in government to military and socialist rule, he went through loss of his business and experienced hardship. At the age 46 , he started a new life with his family by immigrating to the United States and settled in Chicago, Illinois. He was very grateful to God for His blessings and grace for a fresh start in a new country filled with promise and opportunity. He worked hard in supporting the family and stressed the importance of education in all his children. He was blessed with 9 grandchildren and 2 great grandchildren. After his retirement at age 65 years of age, he developed his interest and wrote many Chinese poems. He published his 4th Chinese poem book earlier this year in 2021. Khai Sein and his wife Bee Tin, moved to California in 2004 and settled in Murrieta. He regularly attended the Chinese Bible Church Temecula Valley Campus church, which he considered as his spiritual family, where he developed long, deep, and loving friendships and experienced sweet fellowship. Khai Sein Wong is a beloved husband, devoted father, generous grandpa and uncle, and a kind friend, who experienced God’s faithfulness and blessings throughout his full long-life journey of 96 years on earth and placed his hope in Jesus Christ for eternity in heaven. He is survived by his wife Bee Tin, daughter Sansan and her husband Frank, daughter Stella Kung and her husband Khin Fong, and son David Wong and his wife Stella, also 9 grandchildren and 2 great grandchildren. The family is requesting, in lieu of flowers, please feel free to give donations to CBCTVC (Chinese Bible Church , Temecula Valley Campus) if you are led to give. Papa has been a member of CBCTVC for many years and supports their local and global mission. Although we would love to have all family and friends be with us, services are by invitation only. Thank you kindly for your understanding.

Khai Sein Wong at the age 96 years old, passed away peacefully and went to be with the Lord on August 6th, 2021 at his home in Murrieta, CA in the presence of his family. He was born on November 5th, 1924 in a small farming village of Yung... View Obituary & Service Information

The family of Khai Sein Wong created this Life Tributes page to make it easy to share your memories.

Send flowers to the Wong family.