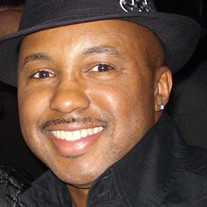 Kevin Darnell Boggan, the eldest of three children, was born on November 19, 1964, to the late William Reed and Gloria Ayler in Detroit, Michigan. Kevin accepted Christ at an early age and was baptized at New St. Mark Baptist Church in Detroit. He attended Detroit public schools, graduating from Cooley High School in 1983. Later that summer, Kevin joined the United States Marine Corps and was stationed in San Diego, California. After completing four years of service, he made Orange County, California his home. Kevin began his career with Westminster School District as an Accounting Clerk in 1997. In July 2006, he was promoted to Intermediate Account Clerk in the Supplemental Services Department. In three short years, he was promoted once again to Accountant in the Business Service Department. In July 2013, Kevin found his home in the Extended School Program as an Intermediate Accounting Clerk, where he was still working at the time of his passing. You could always spot Kevin walking the halls in his stylish outfits and headgear -- the man had great style. Kevin was planning to retire and move to Las Vegas, Nevada, to enjoy retirement life with his loving wife, and to also be closer to his mother and sister. At an early age, Kevin loved music and dancing. He would be in his baby crib bouncing and rocking to the music. In his teen years, he loved reading his Right On! Magazines, watching Soul Train and attending dancing contests throughout the city of Detroit. As he got older, he would stay up late into the night making his music videos and CD's for family and friends, dancing and partying while he was completing them. Kevin did not need to have anyone else around to enjoy himself -- music and dancing were his life. Kevin was known as the dancing machine and his family nicknamed him "happy feet". He was always the life of the party. Kevin also loved his hats and dressing to the tee. In 1986, Kevin met the love of his life while doing what he loves to do -- dancing! After dating for a couple of years and seeing that Juanita enjoyed dancing just as much as he did and could also keep up with him, they decided to marry on March 3, 1988, a union that lasted 34 years. Kevin departed this life on Monday, February 28, 2022. He leaves to cherish his memory: his loving and devoted wife Juanita Boggan; his beloved children: Marisa O'Dell (Brian) of Machesney Park, Illinois, and Devin Boggan (Veronica); five grandchildren: Bryson O'Dell, Athena O'Dell, Evin Boggan, Elvin Boggan, and Brandon O'Dell; Mother, Gloria Ayler of Las Vegas, Nevada (James); his sisters: Tawuana Carroll (John) of Las Vegas, Nevada, and Tahesha Anderson (Phil) of Detroit, Michigan; his nephew Durrell Hill; his niece Dajsia Boggan; his loving and devoted cousin Sharlene Moore; and a host of aunts, uncles, cousins, friends, and relatives. Arrangements are being handled by Miller-Jones Mortuary, 23618 Sunnymead Boulevard, Moreno Valley, California. A Funeral Service will take place at 10:30AM with interment in Riverside National Cemetery at 1:45 PM, Tuesday, April 5, 2022.

Kevin Darnell Boggan, the eldest of three children, was born on November 19, 1964, to the late William Reed and Gloria Ayler in Detroit, Michigan. Kevin accepted Christ at an early age and was baptized at New St. Mark Baptist Church in Detroit.... View Obituary & Service Information

The family of Kevin Darnell Boggan created this Life Tributes page to make it easy to share your memories.

Kevin Darnell Boggan, the eldest of three children, was born...

Send flowers to the Boggan family.