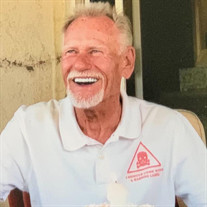 Kenneth Rodney Wall, age 73, of Hemet California passed away on Monday, October 4, 2021 at Loma Linda University Health Murrieta in Murrieta California. Kenneth was born on Tuesday, September 14th, 1948 in Pontiac, Michigan to the late Kenneth Wall and Geraldine Powell-Wall. He is survived by his two daughters, Kristen Hicks (Hemet, CA) and Jennifer McGavran (Menifee, CA) as well as his son-in-law, Gregg McGavran (Menifee, CA). Kenneth was a proud grandfather to 5 grandchildren as well as 3 great-grandchildren. In his early years, Kenneth proudly served his country in the United States Air Force followed by a career with the United States Postal Service where he retired after 35 years of employment. In his leisure time, Kenneth enjoyed playing golf and treasured anytime he could find to fish. He frequently played golf with a group of men on Tuesdays where he was lucky enough to score a hole in one at Cresta Verde Golf Course in Corona California. Every year in November, he participated in, and thoroughly enjoyed, a golf tournament at State Line with the same group of Tuesday golfers and his treasured son-in-law, Gregg. Kenneth spoke fondly of his trips to Mexico and Yosemite National Park throughout his life. In his later years, Kenneth enjoyed taking his family camping where he would teach his grandchildren and great-grandchildren to fish. Kenneth will forever be known for his witty sense of humor and giving nature. A man too loved to ever be forgotten. A service, with full military honors, will be held on Tuesday November 23rd at 10:45AM at Riverside National Cemetery located at 22495 Van Buren Boulevard, Riverside California 92518. Interment will follow at Riverside National Cemetery, Riverside California. Online condolences may be made to the family at www.miller-jones.com In lieu of flowers, please consider donating in Kenneth's name to The Boys Town charity by clicking here : https://support.boystown.org/site/Donation2?3160.donation=form1&df_id=3160&mfc_pref=T

The family of Kenneth Rodney Wall created this Life Tributes page to make it easy to share your memories.

Send flowers to the Wall family.