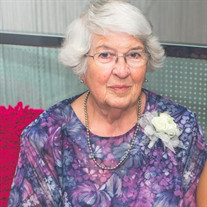 Joyce Eaton Emery passed away quietly at home with her family on January 26, 2021 in Hemet, CA. Joyce was born August 9, 1933 in Hardwick, VT where she lived with her parents, Florence and Everett Eaton until she graduated from the Hardwick Academy in 1951. She attended the New England Deaconess School of Nursing in Boston until she married Kenneth Emery, also of Hardwick, in 1953. Women were not allowed to attend nursing school once they were married at that time so Joyce made the decision to leave school to marry her high school sweetheart. Joyce had three children, Stephanie Arnold (John) Jon Emery (Maria) and Kenneth Emery, Jr (Jennifer). She loved family time with her nine grandchildren: Brian Carlson, Gail Emmons, David Emery, Nolan Emery, Alison Emery Sundahl, Bridget Emery, Jaclyn Emery, Jasmin Emery and Ryan Emery. She has seven great grandchildren. Joyce was preceded in death by her parents and son Jon, in 2012. Joyce was devoted to her Lord and church. She was a founding member of the Thalia Trinity Presbyterian Church in Virginia, the Presbyterian Church in Duncan, S. C., the First Presbyterian Church in Anaheim from 1971-2003 before she moved to Hemet and joined the First Presbyterian Church. She served multiple terms as Clerk of Session, was a Deacon/Elder, and represented the Presbyterian Women at Presbytery. Joyce also served on the Committee on Ministry and Pastor Nominating Committees. She was a loving member of the Esther Circle. Joyce worked for the Orange County Social Services department for more than 20 years, and was an active member of the Orange County Retirees group. Her hands were never idle as she loved to knit, crochet, cross stitch and sew. She sent cards for every occasion to her many friends and family and was an avid letter writer staying in touch with cousins and friends from grade school as well as friends she made from across the country. She loved to travel and spend time with her family and would drive herself to the Bay Area several times a year for family celebrations. Joyce was a very strong and independent woman having been a single mom to three teenagers since the 70’s. Her smile and crazy sense of humor are so missed. A Celebration of Life will be held at the First Presbyterian Church in Hemet on September 11 at 2:00 in the afternoon. Memorials can be made the Women’s Group of the church.

Joyce Eaton Emery passed away quietly at home with her family on January 26, 2021 in Hemet, CA. Joyce was born August 9, 1933 in Hardwick, VT where she lived with her parents, Florence and Everett Eaton until she graduated from the Hardwick... View Obituary & Service Information

The family of Joyce Eaton Emery created this Life Tributes page to make it easy to share your memories.

Joyce Eaton Emery passed away quietly at home with her family...

Send flowers to the Emery family.