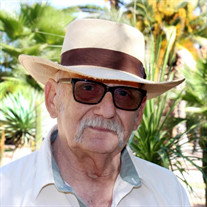 Joseph "Joe" Mayo Nixon, 74, of Hemet, California passed away on Wednesday, June 2nd, 2021. He was born to Opal Faye Long and Myron Stanley Nixon on December 26, 1946, in Alton, Illinois. Joseph and his sister, Gale, were raised in the small town of Chesterfield, Illinois. He graduated from Carlinville High School and went on to earn a Bachelor of Science Degree in Microbiology and then a Ph.D. in Anthropology. Joe was admired in his longstanding tenure as a Professor at the University of Missouri-St. Louis. He also served as a medic for two years in the Army stationed in Korea during the Vietnam War. Joe enjoyed writing, gardening, making homemade beef jerky for family and friends, and was the ultimate Green Bay Packers fan. Like his Father he had an acerbic sense of humor and showcased this well in one of his first published books No Stinkin Grammar. In his retirement he wrote 9 books ranging from fiction to recollections from Navajo to historical nonfiction. Joe’s passing causes tremendous grief for the many lives he has selflessly touched both personally and through his writings throughout his lifetime. Joe is survived by his wife Colleen Hamilton-Nixon, his sister Gale Nixon-Suttles, his daughters Gwendolyn Murray, Melissa Plakio, and Natalie Nixon, his niece Dawn Densmore, his nephew Clay Guthrie, his grandchildren Krystal Nixon, Alexander Montunnas, and Kendall Montunnas, and great grandchildren Lilianna Jade and Declan Joseph Nixon-Serrano. The family has entrusted Miller-Jones Mortuary to care for Joseph and will be planning a memorial to celebrate him and hold some heartfelt traditions in the future. Join us in honoring "Cactus Joe" by planting your favorite cactus and watching it bloom in honor of a great husband, father, brother, and teacher.

Joseph "Joe" Mayo Nixon, 74, of Hemet, California passed away on Wednesday, June 2nd, 2021. He was born to Opal Faye Long and Myron Stanley Nixon on December 26, 1946, in Alton, Illinois. Joseph and his sister, Gale, were raised in the small... View Obituary & Service Information

The family of Joseph Mayo Nixon created this Life Tributes page to make it easy to share your memories.

Send flowers to the Nixon family.