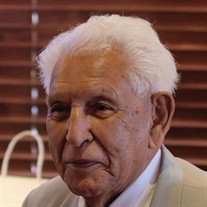 Joe Perez Sada went to be with the Lord at the age of 97, on Saturday, December 11, 2021, in Riverside, California. He was born on Monday, February 11, 1924, in San Antonio, Texas, to Joe George Sada and Victoriana (Perez) Sada. He was one of three children. Joe's love story began 79 years ago when he met the love of his life and his best friend, Irma Sada, in El Indio, Texas, at a gas station store where Joe worked. They were only 14 and 16 years old. She was in the back seat of her father's pick-up truck, while her father was pumping gas. Joe noticed how beautiful she looked and his heart melted. It was love at first sight. They have been blessed with 79 wonderful years of marriage. He was an amazing husband and a devoted father, grandfather, and great-grandfather, who was very proud of his family and loved them dearly. They were blessed with 3 children. Joe was a phenomenal, strong man, with a heart of gold. In his spare time, Joe enjoyed working and fixing mechanical things, and enjoyed family gatherings. His neighborhood knew him well and loved him dearly. Joe retired from civil service from the Fallbrook Naval Weapons Station, then would go to work at Hemet Valley Hospital as the Warehouse Manager before retiring again. For over 20 years, Joe was in charge of the grounds crew for the Ramona Pageant and he assisted in the event organization for concerts at the Ramona Bowl. Most of all, Joe proudly served the in the US Navy. He was a veteran of WWII and the Korean Conflict. Joe leaves behind his devoted wife and best friend, Irma Sada; his loving children, Rich (Carol) Sada and Irene Sada; his grandchildren, Heath (Angel) Sada, Serrena (Corey) Kerfoot Carter, Joe (Denise) J. Sada III, Tanya (Scott) Kerfoot Hawk, and Christian (Caitlin) J. Sada; his great-grandchildren, Benjamin Carter, Victoria Hawk, Brianna Sada, and Maxwell Sada; his nephew, Ralph Castillo and his niece, Mary Helen Montgomery. He was preceded in death by his parents, Joe and Victoriana Sada; his son, Joe Jorge Sada; his brother, Guadalupe San Miguel; and his sister, Eleanor Castillo. Online condolences may be made to the family at www.miller-jones.com

Joe Perez Sada went to be with the Lord at the age of 97, on Saturday, December 11, 2021, in Riverside, California. He was born on Monday, February 11, 1924, in San Antonio, Texas, to Joe George Sada and Victoriana (Perez) Sada. He was one... View Obituary & Service Information

The family of Jose Perez Sada created this Life Tributes page to make it easy to share your memories.

Send flowers to the Sada family.