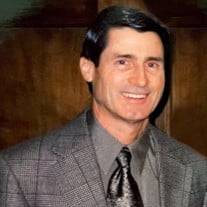 John Emmel left us on April 29, 2022, on his terms: peacefully, quietly, instantly ~ among the comforts of his home, and in the arms of his loving bride of 52 years. Born on August 10, 1944, John grew up in Los Angeles, CA. His parents, Edward... View Obituary & Service Information

The family of John Frederick Emmel created this Life Tributes page to make it easy to share your memories.

Send flowers to the Emmel family.