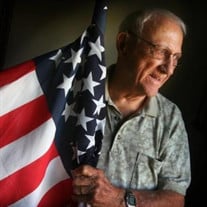 John Albert Ballard was born Dec. 24th, 1920 and passed into eternal life Oct. 1, 2021 at his home at The Village in Hemet, CA, peacefully in his sleep at the young age of 100 & ¾ years. He grew up in Wood Lake, Nebraska (near Valentine) with 14 siblings on a large cattle ranch. He was number 13 and had outlived all his brothers and sisters. John was a country boy and a cowboy. The Ballard kids looked forward to going into town, Wood Lake, in a wagon with their dad, to maybe buy a piece of candy if they were lucky. Once John wasn’t allowed to go because he had been naughty the week before and was very disappointed. He liked to set traps for skunks, coyotes, mink and muskrats and was able to earn money for the pelts. John often checked the traps while riding his horse on the way to his one room schoolhouse, now known as Ballard Marsh Public School – it was used until 2006 (4 students and 1 teacher). One day he tied a dead skunk to his saddle and his teacher wouldn’t allow him to come inside and sent him home, but his mother wouldn’t let him in their home, known as the Ballard Homestead, either. On the ranch he enjoyed riding horses and herding cattle. As time went by, he knew the war was pending, so he joined the U.S. Navy at the age of 20 in 1940. One of John’s older brothers had joined the Army and had spent time in trenches with rats, so serving on a ship seemed like a better idea to him even though he couldn’t swim (John later took swimming lessons in Concord, CA with daughter, Mary Ann in 1955). After training in several military locations, he became a hospital medical corpsman on the USS Curtiss. The morning after the Curtiss returned to Pearl Harbor from Wake Island, it was hit in the early AM by a Kamikaze airplane, and shortly after by a bomb, December 7, 1941. He couldn’t believe the horror of what he was seeing all around him he never wanted to discuss it. More than 30 men perished but the ship didn’t sink. Near the end of the war, 1944-45, John was stationed on a destroyer, the USS Foote, in Okinawa, Japan. Later, John also served in the Korean War that began in 1950. After the war ended, John met his first wife, June Banks, who was an officer, RN, and Navy Wave. June had grown up in Wausa, Nebraska on a farm and they were both stationed at Oak Knoll, Oakland, CA. Mutual friends introduced them. They married in 1943 and later were blessed with a daughter, Mary Ann, and a son, John Elwin. Over the years, the Ballard family lived in San Leandro, Concord and Vista, all in CA. After 20 years in the Navy, John retired from his duties at Camp Pendleton, Oceanside, CA. He tried his hand at trying to sell used cars (but he told the customers what was wrong with the cars), owning a 76 Union Station in Escondido, and selling real estate in Vista and the surrounding areas. John and June moved to Hemet, CA in 1964 when he began his 2nd career, giving driving tests and more for the DMV. John enjoyed food – especially grilled beef steaks, playing tennis, making clocks with geode slices, dancing, traveling in his RV, telling jokes, playing poker and Hand & Foot, cultivating gardens (specially grape tomatoes) and making furniture in his wood shop. John was very handy and creative. He was a very social person who greatly enjoyed spending time with friends and family. John was a generous person who gave his time and money to help others. He drove his Toyota Camry until his 98th birthday! A few years after June’s death, he met Gloria Truttman, a wonderful woman who became his wife in 2005, and his best friend. His life was greatly enriched by adding Gloria’s daughters, Sharon Ranieri, Sheila Cencak, Colleen Barker (Charlie), and Doreen Baldridge (Tony), 5 grandchildren and 6 great grandchildren to his life. He loved Gloria’s family as his own. John and Gloria lived happily together for more than 16 years at The Village Retirement Community in Hemet, enjoying a fun and joyful marriage. John was a loving father, husband, son, brother, uncle, dad, grandpa, great grandpa, and friend. He was preceded in death by his parents, Catherine (Cassie) and William (Billy) Ballard, his son, John Elwin Ballard, first wife, June Caroline Banks Ballard and son-in-law, Robb W. Edmundson. John is survived by his daughter Mary Edmundson (Jim Decker), three grandchildren, Joshua Robb Edmundson, Zachary John Edmundson, Brooke Lee Pridemore (Jason) and 3 great grandchildren, Dolly Robbins, Bella Pridemore and Jack Pridemore. He will be greatly missed. Memorial services will be private. Stapled to John’s funeral pre-arrangement folder was a torn in half piece of yellow notepad paper from 1988. On it he had written this poem: When I go down to the sea by ship, and Death unfurls her sail, Weep not for me, for there will be A living host on another shore To beckon and give “All Hail” *Author Unknown In lieu of flowers, please consider donations to the March Field Air Museum where there are donated items of John’s and a video is being played daily of him speaking about his WWII experiences. Location: 22550 Van Buren Blvd., Riverside, CA 92518. Phone: 951-902-5949. Website: www.marchfield

John Albert Ballard was born Dec. 24th, 1920 and passed into eternal life Oct. 1, 2021 at his home at The Village in Hemet, CA, peacefully in his sleep at the young age of 100 & ¾ years. He grew up in Wood Lake, Nebraska (near Valentine) with... View Obituary & Service Information

The family of John Albert Ballard created this Life Tributes page to make it easy to share your memories.

Send flowers to the Ballard family.