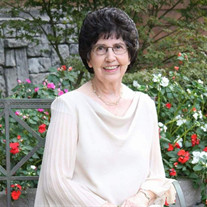 On April 4th, at 4pm our beloved, sweet, loving, always kind mother, grandmother and great grandmother, Jean Ann Clark peacefully took her last breath, with family by her side. She lived a full, productive, and happy life. Jean was born in Riverton, Wyoming, March 12th, 1932 to Zuma and Charles Luster. Jean loved word games, puzzles, traveling, going to rock concerts, going to movies, and she especially loved her 6 children, 20 grandchildren and 47 great grandchildren! She grew up on Wyoming's largest sheep ranch, just north of Powder River. Her father Charles was the foreman. She loved to share stories of her days camping in the sheep wagon with her father, with her dog, and her horse. She also dearly loved her days in Lander working at the Wyoming State Training School. It was in Lander that she met Eldon Clark. They had their first date at Svilars in Hudson, Wyoming and soon fell in love and were married. She raised 3 boys, Brian Ashford, Ronald Bruce, Aaron Wesley, and two girls, Alane Carol, and Karin Sue in Lander. Eldon and Jean moved from Wyoming to Poway, California in 1970. It was in California that they had another daughter, Rachel Lenore. Eldon and Jean had a 7-11 store in Poway for nearly 18 years. They came to love all of the patrons and developed lifelong friendships with the community. Most of their children had their turns working in that 7-11. During this time Eldon and Jean sold their home on Garden Rd. and began construction on a new home, with a small farm just off Poway Rd. Horseback riding, driving the pony cart and letting Rachel and Karin bring their piglets in the house are big standouts from those days. Jean loved being a scout leader and when those boys came over, she had the pony cart rides of her life! She dearly loved her scouts. She also had such a love for animals. Jean would take in strays of all sorts, furry and human. If anyone ever needed anything, mom was there. After 7-11 days were over, Jean went back into nursing as a CNA. Shortly thereafter she studied hard and became a certified LVN. She retired from nursing when she was nearing 80 years old! She would’ve kept going had it not been for health issues. Jean loved BIG and cherished every minute with her children, grand children and great grandchildren. Movie dates, Disneyland, Knott’s Berry Farm, and Chuck E Cheese visits were many! Jean loved to sing, recite quips, and read stories to her family. She encouraged, supported and guided all of her children in all of their endeavors… no matter how big or how small. Jean could not have been more supportive, and she gave the best hugs! Jean loved to travel the world and took her children on many adventures across the United States, Hawaii and Canada. There were also many adventures abroad, to Australia, New Zealand, Greece, Spain, Portugal, London, France, and Jerusalem. Jean was a resident of Poway from 1970 to 2002, she moved to Temecula, California in 2002 where she resided until her passing. She vowed to be positive to her last breath. And she was. Her last words to everyone gathered around her were "Be Happy!” Her work ethic, her love of service, her compassionate heart, and her loving soul live on in all of us. Jean has returned home to her Heavenly Father and is enjoying a lovely reunion with Eldon, her parents Charles and Zuma, and her dear brother Paul. Jean is survived by her children, and their beloved spouses, Brian Ashford and Maurie, Ronald Bruce and Sheri, Aaron Wesley, Alane Carol and Greg, Karin Sue, Rachel Lenore and Vito, her beautiful 20 grandchildren, 47 great grandchildren, and her constant companion of 20 years, her cat Charlie. Services to be held at Redwood Memorial 6500 Redwood Rd., in Salt Lake County, Utah. Date and time to be announced in the coming days.

On April 4th, at 4pm our beloved, sweet, loving, always kind mother, grandmother and great grandmother, Jean Ann Clark peacefully took her last breath, with family by her side. She lived a full, productive, and happy life. Jean was born in... View Obituary & Service Information

The family of Jean Ann Clark created this Life Tributes page to make it easy to share your memories.

Send flowers to the Clark family.