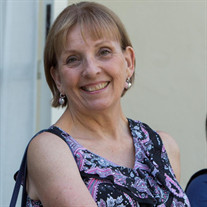 Janet Ruth Cramer passed away on March 27, 2022, at the age of 71 at home in Hemet, California. Janet is survived by her husband of 44 years, Bill; her brother Jim Hillmann (Becky); her son Paul Cramer (Laura), grandchildren Natalie and Hannah; her daughter Cheryl Miller (Adam), grandchildren Miriam and Juliette. Nephew, Joshua Hillmann (Dana) and niece, Mollie Hillmann. Janet was born in Denver, Colorado on July 17, 1950 to Paul and Ruth Hillmann, She graduated from Porterville Union High School in 1968 and received a B.S., Education from Concordia Teachers College, Seward, Nebraska in 1972. Soon after graduation, Janet was called to teach at the Chapel School in Bronxville, New York where she taught the 2nd Grade. Her next call was to St. Paul Lutheran School in Orange, California where she taught the 1st Grade. Janet finished her teaching contract in 1977 at St. Paul’s where she also met Bill Cramer and they later married. Janet then moved to Anza, California to be with her husband on his farm. In 1980 they moved to Winchester, California to a new farm as the business expanded and later moved to Hemet in 1991. Janet resumed her teaching career in 1985 at St. John’s Lutheran School in Hemet, California. She taught in many capacities there until she retired in 2016. Her emphasis at St. John’s was helping children through various remedial reading programs. For many years Janet was a dedicated volunteer and fundraiser for Good Shepherd Lutheran Home of the West which became Bethesda Lutheran Communities and is now AbleLight. This is a Christian ministry that serves the intellectually and developmentally disabled. Most recently, for eight consecutive years, Janet organized and directed the Jim Hallmann Memorial Golf Tournament benefiting this organization. But Jesus called them to him, saying, “Let the children come to me, and do not hinder them, for to such belongs the kingdom of God”. Luke 18:16 In lieu of flowers, please make donations to: AbleLight (Formerly Bethesda) 600 Hoffman Drive Watertown, WI 53094 Memory of Janet Cramer https://ablelight.org/donate/

Janet Ruth Cramer passed away on March 27, 2022, at the age of 71 at home in Hemet, California. Janet is survived by her husband of 44 years, Bill; her brother Jim Hillmann (Becky); her son Paul Cramer (Laura), grandchildren Natalie and Hannah;... View Obituary & Service Information

The family of Janet Ruth Cramer created this Life Tributes page to make it easy to share your memories.

Send flowers to the Cramer family.