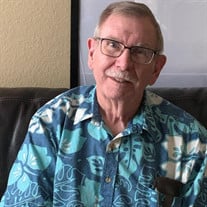 Howard Randall Clark was called home by the Lord on August 9th, 2021 in San Bernardino, California. Born in Los Angeles at White Memorial Hospital June 27, 1944 to Eleanor Birdsey Holmes and Howard Bruce Clark, Randy spent his early years in Burbank, California until his mother remarried and the family moved to the Palmdale area. While a student at Palmdale High School, he was an active member and leader of the Future Farmers of America club, an all-area standout on both the football and track teams, and worked for the family’s honey harvesting business. It was also during this time that he met his future wife, Linda (Hendricks) Clark. After high school, Randy attended Cal Poly Pomona where he ran track and studied Agricultural Management beginning in 1962. Two years later he and Linda were married. His studies were cut short when he was first drafted and then chose to enlist in the U.S. Army in 1966. After completing basic training as an engineer, he qualified for radar training school and spent the rest of his enlistment at Redstone Arsenal in Huntsville, Alabama where he worked on the Nike Missile System and was a member of the honor guard. After being honorably discharged, Randy was hired by Pacific Bell in San Diego, California, where he designed telephone lines from 1969 to 1973. During that time, he and his family lived in Imperial Beach and it was then he first felt called to ministry as a member of First Southern Baptist Church of Imperial Beach. To pursue this calling, he first finished a bachelor’s degree in Business at California Baptist College in Riverside, California in 1974. Then he attended Southwestern Baptist Theological Seminary in Ft. Worth Texas, where he earned an M.A. in Religious Education. After seminary in 1976, Randy and his family returned to California where he was charged with shepherding the fledgling First Baptist Church in Borrego Springs, California, about 80 miles east of San Diego. The church had just 12 members when he arrived, no property or building of their own, and the majority of his salary was paid by the denomination. During his five years there, the church grew, he helped secure a donation of four acres, and he oversaw construction on a church building still in use today. He also coached little league baseball and high school football. From 1981-1993, Randy served as pastor of Pacific View Baptist Church in Cardiff-by-the-Sea, California, where he oversaw the construction of a standalone preschool building eventually absorbed by the Santa Fe Christian Schools, was a prominent member of the San Diego and California Southern Baptist Conventions, sat on the board at the San Luis Rey Hospital, and provided community care as a chaplain in connection with various civic organizations. Randy’s final work as a pastor took place at First Southern Baptist of Ceres, CA from 1993 to his retirement in July, 2009. While there, he partnered with members of his congregation to start a food program that grew to serve hundreds of people each month and also led to his serving for many years as the chairman of the board of directors for the Stanislaus Valley Foodbank (Second Harvest), one of the largest in the nation. While in that position, he helped several food programs around the region improve and strengthen their operations in order to increase their reach and access to donations. He also led teams of volunteers to take part in the Southern Baptist Convention’s World Changers program, completing roofing repair and property restoration projects for people in need. A familiar figure around the community, he also drove the church’s bus to provide rides for people who otherwise could not attend services. After retiring to San Jacinto, California, Randy was active in teaching and serving on the board of trustees at Hope in the Valley Baptist Church of Hemet until just before his passing. He and Linda travelled, doted on their grandchildren, and he took up woodworking, completing projects for family members and friends, all while remaining an avid fan of the San Diego Padres and Chargers. He will be missed by all who knew him. Randy is survived by his wife, Linda, his children and their spouses Paul and Dell Clark, Jeanette Clark, Michael and Heather Clark, and Karen and Anthony Duban, as well as his grandchildren Jordan and Reagan, Kasey, Holden, Kenai, Judah, Kyra, and Avery, along with his brother and sister-in-law Richard and Lori Clark, and his niece and nephews, Terry Foster, Greg Thomas, Ron Clark, and Cliff Thomas. His brother Al Thomas and sister Marge Etchandy are both deceased. A memorial service will be held at 10 a.m. on Saturday, September 11th at Hope in the Valley Baptist Church, 1480 N. Kirby St., Hemet, California.

The family of Howard Randall Clark created this Life Tributes page to make it easy to share your memories.

Howard Randall Clark was called home by the Lord on August 9th,...

Send flowers to the Clark family.