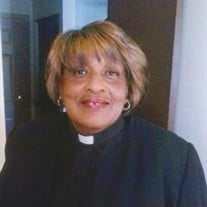 Apostle Helen Baxter Apostle Helen Baxter was preceded in death by her father and mother, Willie and Mattie Talbert and her eldest sister Almeater Burt (who just went home in June 2021). Apostle Helen Baxter is survived by Husband: David Baxter; Daughter: Ramona Wilson; Grandchildren: Kenya Pruitt, Sharod Taylor and Shavontay Wilson; Great Grandchildren: Tahiry Manning and Royal Alexander; Siblings: Willie (Lavenia) Talbert, Jr, Larry (Sondra) Talbert, and Gwin Talbert-Shannon. She was a second mother to Marcus Talbert and Erin Shannon; and by a host of nieces, nephews, cousins, and friends. Apostle Helen Baxter was born June 14, 1946, in Toledo, Ohio, to the parents of Willie and Mattie Talbert. She moved to California in 1974, where she joined the Los Angeles Christian Center under Dr. Floyd C. Miller. Helen became the first woman ordained as a minister in that church (her gifts truly made room for her). She later received her Doctorate and eventually was ordained as an Apostle under Apostle Warren from Believers in Ministry. God called her to teach and minister to the body of Christ, the unsaved, and primarily to hurting woman who had come out of or was still in violent and abusive relationships. She was anointed to teach these women how to let go of the baggage that weighed them down, and which was keeping them from reaching a higher calling by renewing their minds in Christ Jesus. Born out of this passion was the Baggage Free Women’s Ministry, which was founded on Hebrews 12: 1-4 & Philippians 3:12-14. Apostle Helen Baxter (who preferred to be called just Minister Helen) mission was to teach those who had a desire to grow, to be more rooted and grounded in the things of God, to die to flesh, and know that it is no longer they that lived but the Christ that lives in them. Helen’s favorite saying to the ladies she ministered to was, “It’s time to put your big girl panties on!” It’s truly that time now, ladies, our sister is with the Lord, rejoicing. And we should show forth with our lives – the power of our changed lives in Christ as her legacy. Apostle Helen, we will see you again on that great getting up morning, until then, “We won’t come down off the prayer wall.”

The family of Helen Dolores Baxter created this Life Tributes page to make it easy to share your memories.

Send flowers to the Baxter family.