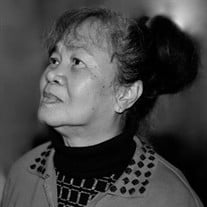 Gilda Tanap Cohick passed away on April 30, 2021 in Hemet, California at the age of 74. She was born on August 14, 1946, in the Philippines, to Angel Tanap Sr. and Paciencia (Casayuran) Tanap. Gilda was a hardworking, strong woman, who served as a pillar of strength for others. After obtaining her Bachelor's, she became a successful, self-employed business owner, working in assisted living for 25 years. Gilda was married to the love of her life, Harold M. Cohick. They met in the Philippines, during Harold's missionary work and they had been married for 36 sensational years, before his passing in January 2016. While balancing her company and being a devoted wife, she was also an incredible mother. She was supportive and dedicated to her children, always finding pride in watching them reach their goals. Gilda was blessed with 3 children of her own as well as 6 step-daughters and many grandchildren. She was also involved in her local church and found joy in giving. Reading romance novels and occasional trips to gamble with friends were her guilty pleasures. She was a helper with a huge, giving heart and food was her love language; everyone left her home with a happy heart and a full stomach. Gilda was a genuine and loyal friend, and loved her family unconditionally; she will be missed by all who knew her. Gilda is survived by her loving children, Joanna Jimenez (Gerard Minglana), Harold (Jenniffer) Cohick, and Jeffrey (Kasey) Cohick; her wonderful grandchildren, Elijah Minglana, Maya Jade Minglana, Molly Robinson, Elizabeth Pickering, Ariel Henderson, Precious Cohick, Kamra Cohick, Kyra Cohick, Nashell Cohick, Kyron Cohick, Alani Samuel, Macayla Gutierrez, Connor Cohick, Claire Cohick, and Caelin Cohick; and her adoring great-grandchildren, William Blakeman, Eric Blakeman, Aalyiah Thompson, Grayson Robinson, and Rebecca Pickering. A visitation will be held on Wednesday, May 26, 2021, from 8 AM - 12 PM, at Miller-Jones Mortuary, located, at 1501 W. Florida Ave, Hemet, CA 92543. A funeral service will follow at 12 PM. Graveside service will be held at 2 PM, at Riverside National Cemetery, located at 22495 Van Buren Blvd, Riverside, CA 92518. A reception will be held at Jeffrey’s home in Riverside, CA.

Gilda Tanap Cohick passed away on April 30, 2021 in Hemet, California at the age of 74. She was born on August 14, 1946, in the Philippines, to Angel Tanap Sr. and Paciencia (Casayuran) Tanap. Gilda was a hardworking, strong woman, who served... View Obituary & Service Information

The family of Gilda Tanap Cohick created this Life Tributes page to make it easy to share your memories.

Send flowers to the Cohick family.