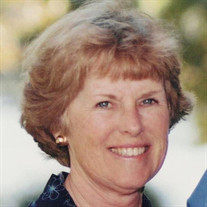 Gail Elaine Louise Herrscher (nee Hawkins) was born June 5, 1940 in Detroit, Michigan to Isaac and Ruby (nee Love) Hawkins. Gail grew up in the Detroit, MI area and spent time in Ottawa, Canada. Gail's mother Ruby died of cancer when Gail was 4 years old, and Gail was taken care of by her aunt Dorothy in Detroit, and aunt Mildred in Canada after her mother's death. Gail was very fond and appreciative of her aunts. A couple of years later Gail was taken care of by her kind and loving step mother, Valera Hawkins. While still in elementary school in the Detroit area, Gail met the love of her life, Ralph Herrscher, at Knox Presbyterian church. Although they went to different high schools, Gail and Ralph began dating in High School. Ralph and Gail were married in January 1959 (almost 63 years). Gail was very active in the churches that she attended. First at Knox Presbyterian church in Detroit, MI. Then at Kirk of the Hills Presbyterian in St. Louis, MO. Later at Yorba Linda Evangelical Free church, in Yorba Linda, CA. Also at The Church of Shaver Lake, CA. And finally at Rancho Community Church in Temecula, CA. Gail and Ralph had many friends at each of the churches they attended. Gail was also active in P.E.O. (Philanthropic Educational Organization). She developed close friends and was active in PEO events and fundraisers, which provide scholarships for deserving young women around the world. Gail also volunteered with the Sowers ministry and “Samaritan’s Purse” through her church. Gail enjoyed spending time with family and friends. She had many friends. She was in a cooking club. She liked to sew and make quilts. She liked to read books. She enjoyed playing cards. She liked to travel. She enjoyed the outdoors and spending time on the water. When she was younger, she spent many summer vacations at her in-law's cottages on Lake Huron in Oscoda, MI, and later at Ralph and Gail's vacation home at Shaver Lake, CA in the Sierra Mountains of California. On December 22, 2021 Gail's battle with pancreatic cancer came to an end. Gail died peacefully surrounded by her family. Gail went home to be with Jesus in Heaven, and is no longer sick, and no longer in pain. We look forward to seeing Gail again in the future at her new address. Gail will be remembered for her love of her husband and family, her sense of humor, and her lifetime of faith in God. Gail was smart, kind, funny, and will be dearly missed. Gail was preceded in death by her parents Isaac and Ruby (nee Love) Hawkins, her older brother Lyle Hawkins, and sister-in-law Marjorie Hawkins. Gail is survived by her husband Ralph, and her four children Kenneth (Alison) Herrscher, Roger (Pamela) Herrscher, Julie (Chris) Sibley, and Eric (Jessi) Herrscher. She is also survived by her nine grandchildren: Kaitlyn Herrscher, Aaron Herrscher, Elise (Chris) Yuan, Aubrey Herrscher, Andrew Sibley, Ryan Sibley, Adam Sibley, Samuel Herrscher, and Maya Herrscher. Gail is also survived by her brothers Richard Hawkins and Terry Hawkins, sister-in-law Luella Wyman, sister-in-law Suzanne Hawkins, and by nieces and nephews Janet Westlake, Danielle (Mark) Nelson, Christopher Hawkins, Jason Westlake, Nick Westlake, and family friend Bill Kilty. In lieu of flowers, Gail's family requests that donations be made to Rancho Community Church. Please specify “Sowers Ministry in memory of Gail Herrscher” on the donation. Thank you.

The family of Gail Elaine Louise Herrscher created this Life Tributes page to make it easy to share your memories.

Send flowers to the Herrscher family.