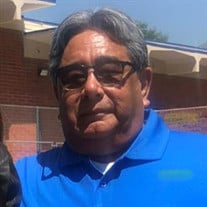 Federico De Leon Flores Jr., known to family and friends as Fred, passed away on Friday, August 6 at the age of 66. Fred is remembered as a loving husband, hardworking father of four, and proud grandfather of nine. Fred was born in Oakland, California to Federico Flores Sr. and Fely Salva Cruz in 1954. At an early age, Fred developed a lifelong passion for martial arts. He began delivering newspapers and mowing lawns so he could start taking karate classes, which he paid for himself. After graduating high school, he joined the United States Air Force at the age of 17. He was able to gain top secret clearance working in crypto maintenance, serving from 1972-1974. Fred also served in the Reserves an additional four years following his active duty service. While serving in the Air Force Reserves and working as a manager at McDonalds, he met and fell in love with Nancy Ellen Hyland of La Canada, CA. They married in July of 1976 and had four children from 1977-1983. In 1980 they moved to Fontana to help with the family business, Pioneer Chicken. Prior to becoming a police officer, he worked as a security guard until he graduated from the Police Academy in 1985. After graduating from the Police Academy, he became a police officer for the city of Fontana. He served the community for over twenty years. He proudly held various assignments in the department including Patrol, K-9 Officer, Field Training Officer, SMASH Gang Unit, Detective, Hostage Negotiator, and Motorcycle officer. While serving on the police department he competed on the Police Olympics Shooting Team and played on the football team. He also enjoyed attending the yearly Baker 2 Vegas runs. Through the police department, he became certified as a Krav Maga instructor and was able to teach fellow officers this contact combat self defense method. He continued to serve the community and the police department after his retirement in 2006. He offered free self defense courses to officers, volunteers, and members of the community. In 2017, he became a police volunteer, patrolling the city once again. In addition to being a police officer, he owned various small businesses throughout the past 30 years. He operated a car alarm and stereo installation service, co-owned a Karate dojo, and owned a screen printing business. He developed a reputation for his hard work and deal making abilities. Following his retirement from the police department in 2006, he pursued many hobbies. Some of his hobbies included RC cars, RC airplanes, flying drones, learning guitar while recuperating from knee surgery, joining a HAM radio club, and most recently remodeling his mom’s house. Some of his favorite hobbies included hosting “boot camps” for his grandkids to ensure they would grow up to be productive members of society, barbequing for family get-togethers, and toting his granddaughters to and from Krav Maga classes. Most importantly, he was a caring son, brother, husband, father and grandfather. He is survived by his mother, Fely and three siblings; his loving wife Nancy; his children: Crysten Watkins, Kimberly Morales, Kevin Flores and Cassie Avila; his nine grandchildren: Kalia, Berlynn, Phoenix, Kyan, Ava, Karis, Reverie, Kevin Jr, and Ella.

Federico De Leon Flores Jr., known to family and friends as Fred, passed away on Friday, August 6 at the age of 66. Fred is remembered as a loving husband, hardworking father of four, and proud grandfather of nine. Fred was born in Oakland,... View Obituary & Service Information

The family of Federico De Leon Flores Jr. created this Life Tributes page to make it easy to share your memories.