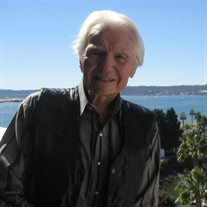 Farville "Bud" Kirkwood Mills, Acom. USN, Retired June 1924-December 2021 California Native Son Husband, Father, Friend and many other Distinctions U. S. Ski Patrol Member 1947 -1987 American Legion Member, Hemet, #53 California Real Estate Broker, Retired The Highlanders, Highland Palms Senior Estates and Country Club Member. His passing on December 7, 2021, to his Eternal Destination was peaceful, after many years of suffering from cancer and the treatments, debilitating at times, but giving him more time with us. Brave, courageous, uncomplaining and loving life, loving God, grateful for each day as a Bonus. He was born June 16, 1924, at Anaheim Landing just South of Seal Beach, California to parents Bud and Maggie Mills. He grew up with his Mother in the deepest days of the Depression for our whole country. Attended schools in East Hollywood, California know as Las Feliz District. As he approached graduation at John Marshall High School he joined the US Navy, November, 1941, just days before Pearl Harbor was bombed. His service took him to England, Europe, North Africa, and after D Day 1944 he was assigned to the Pacific, and his Squadron was changed to VPB 111 in the Pacific Fleet. Based on Hawaii, Tinian, Mortai, Leyte, Mindoro, Peleliu and Palawan, a strike squadron, with targets of shipping and installations. One of the last of the VPB 111 Squadron with the crew. His crew was one of the first to head for England, and last to leave the Pacific. November, 1945 he was discharged where he started in 1941 The Naval Training Station, San Diego, Ca. Chief Petty Officer Mills returned home at the end of the War, to his old neighborhood, his Mother and Friends that remained close for the remainder of their lives. Along with his school and neighborhood friends, while serving in the Navy, a special Bond with the Crew brought them together until recent days where he was the last to survive. After returning home and introduction to the Movie Business, he became a Contract Actor at 20th Century Fox Studios for a time, finding this career path was unsuitable for him. However this experience brought about a lot of stories of his standing in for several big name actors of the day. He married in 1946 to Colleen Mills which ended with her death in 1962. A son was given to them in 1955 . After her passing, lost at the time, they travelled to live in Australia, only to return to the US in 1965. At his place of Employment in March of 1965 he met his loving wife, Barbara Simonds. Very much in love, they married February 14, 1969, he said "finding a new family to love and to be a part of they started their life with Kevin in Costa Mesa, California. Then fulfilled a dream of his moving to Lake Tahoe, California. Having a passion for Down Hill Skiing, and spending years with the National Ski Patrol Organization it was a fit. He remained an active member until 1987. 1958-1960 Member of the 1960 Winter Olympic Games he was Patrol Leader and Avalanche Control Team. Being accepted as Captain of the Honor Guard for the Opening Ceremonies held at Squaw Valley, Ca. (no longer called Squaw valley now). was an exciting time, lots of work and relationships built that lasted a life time. Illness changed the everyday plans for his life in 2008 and a strong desire to return to Southern California to be near family and friends in the sunset of his life. He has been given the very best of care from Good Doctors, Sweet and Knowledgeable Nurses, Medicine. Always with Gratitude for all the wonderful care givers at Kaiser Permanente -Riverside. His last days blessed with more life with the Love of his life Barbara, because of the Kaiser Hospice Care. Sincere appreciation to all that came, that cared and made him comfortable as possible. They bought a place a Highland Palms Senior Estates and Country Club in Homeland in 2008, moved in Feb. 2009, nearby sister in law Rose, Kay, Patricia, Cindy and brother in law Gordon B. Simonds. Sister in laws, Radie, Sue and Mary Ann preceded him in death, along with Brother in laws Don, Grant and Bill Simonds preceded him in death. They all meant so much to him, enriching his life beyond measure. A true Gift from God is family. Reading his bible, praying each morning was a routine matter for him up to the day before his passing. His beliefs were sorted out from God's word, by his reading Old and New Testament 4 time through. His faith was strong and influenced from his early days by his Mother and her family from Texas. Graveside Services: Riverside National Cemetery, Thursday December 23, 2021. 2:00 PM 22495 Van Buren Blvd., Riverside, Ca. 92518. Officiating at Grave Side Service; Chaplain Danny Beteta. Celebration of Life and Remembrance, at Highland Palms Senior Estates and Country Club, at Main Club House Bldg. 30777 Butia Palm Avenue, Homeland, Ca. 92548, Saturday, January 22, 2022. Food and Beverage Catered as requested by Bud. Please Join us. In lieu of Flowers Donations will be received by 1. Church of your Choice. 2. American Cancer Society, P. O. Box 7899, San Francisco, Ca. 94120 or online. 3. Kaiser Permanente Foundation Hospitals, Bereavement Services, 10917 Magnolia Avenue, Riverside, Ca. 92505. 4. American Legion, Legionnaire Sons, Riders for God and Country, Commander: Joe Males, Larry Blair and Terry Ireland, Post 53 124 No. Ramona St., Hemet, Calif. 92543, 5. BGEA, Good Samaritan or Evangelistic Association, 1 Billy Graham

The family of Farville "Bud" Kirkwood Mills created this Life Tributes page to make it easy to share your memories.

Send flowers to the Mills family.