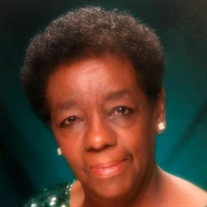 Remembering Elouise M. Harvest The Big E Elouise was born on December 28, 1931 to Dudley Patrick Levy Sr. and Elnora (aka Nora) Batiste. She was delivered by a midwife at her parents&#8217; home in Blake&#8217;s Alley, in Lake Charles, Louisiana.... View Obituary & Service Information

The family of Elouise Marie Harvest created this Life Tributes page to make it easy to share your memories.

Elouise was born on...

Send flowers to the Harvest family.