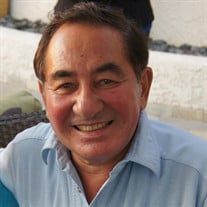 Eduardo Gabriel da Silva “Ed” was born March 25th, 1936 in Kobe, Japan and passed away suddenly on February 24th, 2021. He had just received his second COVID vaccine shot and was making plans for new adventures after a tough year of isolation. Ed loved to socialize and celebrated his vaccination with a trip to the local wineries just days before his death. Ed grew up in Yokohama, Japan, and lived there until WWII began. Ed’s family, considered foreigners because of their Portuguese descent, were vacated from their home and relocated to a small compound outside Gora, in Hakone. Ed and his siblings often shared stories from their confinement - picking bamboo shoots for the community, escaping via train to the coast to sneak back fish, developing a hatred for beets since that was a main staple. Later in life, Ed would say we are having “beets for dinner” which actually meant the family was going to their favorite restaurant, The Original Red Onion. In 1954, Ed traveled to the United States to attend the University of Arizona where he obtained a BS degree in Electrical Engineering. While there, Ed served as President of the International Student’s Club where he met the love of his life, Carolyn Lee Elder, “Fidi” to friends and family. The two dated throughout college and married on August 18th, 1962, in Pasadena, California. They quickly started a family and ultimately had three children, Sandy, David and Suzy. Ed and Carolyn shared a love of travel, and every summer they would pack up the kids and the two dogs in a station wagon towing a tent trailer. They visited state and national parks, trekked across the country multiple times, and spent many a summer at Lake Winnipesaukee in New Hampshire to visit Carolyn’s parents, who were natives of New England. Later in life, they enjoyed their Marriott timeshare, and settled on cruising as their preferred method of getaway together. They took a total of 28 cruises together on Princess Cruise lines! Ed started his career at Burroughs Counting Machines in Pasadena where he worked with a team of engineers designing the first business computers. He then worked for RCA in New Jersey where he designed early computers for military use. An offer from NCR in El Segundo brought Ed and Carolyn back to the West coast and in 1969 he joined Xerox, where he worked for 31 years in the Electronics Division – Design Automation Group, managing the team responsible for supporting the design of circuit boards that went into copiers, printers and computers. Ed loved working at Xerox, and made many lifelong friends during his time there. The most important part of his life, however, was probably the time he spent raising his family in Rancho Palos Verdes. Ed and Carolyn lived in RPV for 37 years, were wonderful neighbors, friends and entertainers, and extremely active in the community. Ed was very involved with all of his kids’ sports teams and could often be found spending his entire weekend refereeing soccer or umpiring baseball or softball games – he was so proud of their many accomplishments on and off the field. Ed and Carolyn moved to the Four Seasons community in Murrieta in 2002, ready to enjoy retirement. They quickly became involved in the community, made good friends, and Ed ultimately served numerous times on the board and finance committees. Sadly, in 2017, Carolyn passed away unexpectedly. This prompted Ed to get even more involved, and he dedicated the last few years of his life to his family, grandchildren, neighbors and friends. He could be found at almost every Four Seasons social event and his commitment to the community was recognized by all. Ed & Carolyn’s home was on a cul-de-sac, and all the neighbors looked after one another, which made him happy. Perhaps the sweetest memory they will have is Ed’s morning routine of putting his slippers on and delivering each neighbor’s newspaper to their doorstep. One of the family’s most treasured recent memories was a trip to Japan in 2019. Ed, along with his three children, and his niece and her family, were able to travel to Japan together to attend his sister Genny’s memorial mass at their high school, St. Joseph’s International College (SJC) in Yokohama. Sake tasting, revisiting Gora (but this time via the Hyatt Regency, without beets!), a day at the Yokohama Country and Athletic Club, and spending time with many SJC alums were highlights of the trip. We are blessed that he was able to have this last big trip, pre-pandemic, to relive memories from his childhood in Japan. Looking back, it’s safe to say that this precious family adventure punctuated a life well-lived, full of generosity, kindness, and love for family & friends. Ed is preceded in death by his wife Carolyn “Fidi” Elder da Silva, Father Guilherme “Gillie” da Silva, Mother Marie Renault “Sumi”, Sister Genevieve and Brothers Edmund, Andre and Timothy – his twin brother. He is survived by his three children Sandra “Sandy” Silva (Frank), David “Dave” da Silva (Sara) and Susana “Suzy” Hamilton (Cameron) and six grandchildren; Rachel (23) and Lauren (20) Silva, Andrew (14) and Colby (11) Hamilton, Conor da Silva (4) and his wife’s namesake, Carolyn da Silva (2). He was never one to miss “nini time” with a “gin up, with a twist, martini”. We hope everyone will toast Ed on his 85th birthday March 25th 2021, at “nini time” 5pm sharp! Cheers Ed! We love and miss you! In Lieu of flowers please make donations on behalf of Eduardo da Silva to his favorite charity: St. Martha’s Thrift 39793 Avenida Acacias, Murrieta, California 92563 (951) 677-0078.

Eduardo Gabriel da Silva &#8220;Ed&#8221; was born March 25th, 1936 in Kobe, Japan and passed away suddenly on February 24th, 2021. He had just received his second COVID vaccine shot and was making plans for new adventures after a tough year... View Obituary & Service Information

The family of Eduardo Gabriel da Silva created this Life Tributes page to make it easy to share your memories.