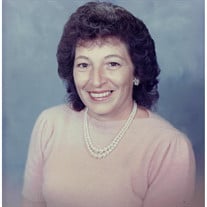 Dianne Juanita Verdugo, age 77 of Hemet, California passed away on Friday, August 27, 2021 surrounded by her loving family at home. Dianne was born on March 24, 1944 in Whittier California. She was the daughter of the late John Paredez and the late Mary Alice (Aguayo) Cortez. Dianne was preceded in death by her parents, her son Andrew Verdugo, her siblings Larry Cortez & Cora Lee Cortez. Dianne is survived by her husband and high school sweetheart of 59 years, Eddie Verdugo her children Laura (fiancé Mike Herman) Camille Cloyd (Kirk) daughter in law Suzanne (Soza) Verdugo; siblings June Cortez Hicks (Ron), Eddie Cortez, John Cortez, Donna Cortez, Bobby Cortez, sister in law Cathy Cortez; grandchildren Shoshana Ybarra (fiancé Kyle Tolmasov), Vanessa Barnes (Page), Christopher Verdugo (Danielle), Ariana Verdugo and Michael Cloyd (fiancé Caitie Munn) 2 great grandchildren Lincoln Barnes and Sedona Verdugo and many extended family. Anyone who knew Dianne knew she was a patriot. She loved her country, our military, our police and firefighters and especially her family. She was a 1962 graduate of Pioneer High school, Whittier CA. Dianne was a bilingual aide at DeAnza Elementary school in the San Jacinto district. While her husband was away on fire assignments, she was involved with AYSO, YMCA and Valley Wide Sports with her children. In 1975, Dianne Verdugo started volunteering her time at the Valle Vista Library and in 1980 became a member of Friends of the Valle Vista Library Board, where she remained for 25 years, she was also a patron for 49 years. Dianne oversaw the rebuilding of the library, where she was an advocate and was extremely vocal in the evolution of Valle vista hidden gem. In 1993 she initiated a program at the library, which sent valentines to hospitalized veterans at Loma Linda Hospital for more than 22 years. The program had a box in the library, which encouraged children, students and families throughout the area to decorate and bring in cards for injured veterans. The program was exceptional in that it not only benefited the veterans but also drew the public to experience the Valle Vista Library. In previous years, she was integral in locating names on the wall for fallen service member’s families and friends. Her knowledge of the computer databases and related memorial books had made her a special asset in the sacred ceremonies and commemorations associated with the wall. Another tradition of Verdugo’s was reading the Roll Call in the Riverside National Cemetery on Memorial Day. She had participated in this patriotic event every year since its introduction in 2009. The first year it took place, the Roll Call began on Armed Forces Day, continued through Memorial Day, naming 48,000 to 50,000 service members, and took place 24 hours a day, 7 days a week, with volunteers reading for an hour each until completed. In recent years, the Roll Call has been reduced to include veterans from year to year. Verdugo had also maintained and contributed to the service member memorial board of local fallen veterans on the northern corner of Fairview and Florida Ave. The board was eventually taken down respectfully, and the pictures and memorabilia were gifted to local museums. Dianne took pride in packing boxes for the troops with Pass area supporting soldiers group and also doing a patriotic program for the residents of Yorkshire house. They enjoyed the music that was played and loved waving the American flag to the music. Dianne was very Proud of the three generations of United States Forest Service firefighters in her family and her Smokey Bear collection. Verdugo hosted “Moments in Time” a monthly speaker program at the Valle Vista Library. The first speaker was Verdugo, who shared her experiences as a volunteer docent for the Vietnam Moving Wall Memorial in stories, pictures and archival materials. She also talked about observing March 30, which is “Welcome Home Vietnam Veterans Day,” and was made a state of California holiday by Gov. Arnold Schwarzenegger during his tenure. 2017 was the 50 year anniversary of withdrawal of troops from Vietnam. She enjoyed family history research and was a member of the Hemet San Jacinto Genealogical society also she helped publish the 1st volume of the “San Jacinto Past and Present” history book. Services will be live streamed https://vimeo.com/event/1256139/6874c116dc

Dianne Juanita Verdugo, age 77 of Hemet, California passed away on Friday, August 27, 2021 surrounded by her loving family at home. Dianne was born on March 24, 1944 in Whittier California. She was the daughter of the late John Paredez and... View Obituary & Service Information

The family of Dianne Juanita Verdugo created this Life Tributes page to make it easy to share your memories.

Send flowers to the Verdugo family.