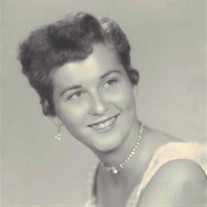 Diana Wilson, beloved mother and grandmother, passed away on May 21, 2021, at the age of 81 in Hemet Ca. Diana was the youngest of six children born to Clifton and Evie Goforth. Born in Texas, her family moved to San Jacinto in 1940. She attended school in San Jacinto where she met and later married Blayne Wilson. They had three children and although their marriage ended in divorce, they remained good friends throughout their lives. Diana was employed by the Riverside Unified School District as a teacher’s assistant in Special Education for nearly 30 years. She cared deeply for her students and remembered many of them up until her passing. During the summer breaks she spent time in her adopted state of South Dakota. She had a deep love and appreciation for Custer State Park, where she enjoyed spending time with her many friends who lived and worked within the park. While there, she took pleasure in catching up on her reading from the porch of her friend Kay Couch’s rustic cabin. She delighted in watching the local park animals, including great herds of roaming bison as they strolled through the back yard of her friend’s cabin. Later, when it became too difficult to make her yearly trip to South Dakota she enjoyed spending her time with family, shopping for bargains and trying out new recipes. Diana leaves behind her dear sister, Mary Lee Eubanks, her three children: Terri (Gary) Moore and their two sons, Jeff and Kevin, Teresa Wilson and her three dogs, Lucy, Dot and Max, Tim (Janice) Wilson and their two daughters, Alanna and Lauren. She was also Great Grandma to Skye and Raphael, children of Jeff Moore and Jonathon, son of Alanna Wilson. Additionally, she leaves behind many, many nieces and nephews who loved her greatly. Funeral Services will be held at 2:00 P.M. Saturday, June 12, 2021 at Miller Jones Mortuary in Hemet with a reception to immediately follow.

Diana Wilson, beloved mother and grandmother, passed away on May 21, 2021, at the age of 81 in Hemet Ca. Diana was the youngest of six children born to Clifton and Evie Goforth. Born in Texas, her family moved to San Jacinto in 1940. She attended... View Obituary & Service Information

The family of Diana Faye Wilson created this Life Tributes page to make it easy to share your memories.

Diana Wilson, beloved mother and grandmother, passed away on...

Send flowers to the Wilson family.