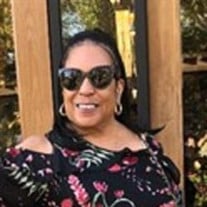 Deborah Renee Bilberry-Dixie was called home by the Lord on Monday, August 30, 2021. Deborah, who was affectionately called Debbie by her family and friends, was born on April 8, 1954 to Charley Henry Bilberry Jr. and Lillie Mary Smith Bilberry. Debbie attended Inkster High school in Inkster, Michigan where she was the freshman class attendant on the Homecoming court. Debbie graduated from Michigan State University in 1976 where she pledged and became a member of Delta Sigma Theta Sorority, Inc. Debbie completed her Education by receiving a Masters in the art of teaching from Grand Canyon University. In 1977, Debbie followed her dream of living in California. She moved to Los Angeles where she developed a close relationship with her younger cousins Madeline and Zena Smith. Debbie pursued her career as an elementary school teacher. Debbie taught in multiple school districts; 25 of her 32 plus years were with the Pomona Unified School District. While working in Pomona, Debbie met her late husband Raymond Dixie. Debbie was a devout Christian. This was exemplified by her works in giving and sharing. For many years, Ray and Debbie were members of the Crenshaw Christian Center in Inglewood, California which was under the ministry of the late nationally acclaimed Reverend Frederick K.C. Price. Debbie enjoyed fourteen years of retirement in Moreno Valley California. Debbie’s hobbies included fine cuisine and several types of music. Debbie enjoyed cruising and traveling with her parents who she was very close to, and other family members and friends. She spent significant minutes on the phone with her sister discussing the soap operas. Debbie is survived by her sister Pamela Bilberry West (Webster West); her brother, Preston Bilberry (Christine Bilberry); Preston’s former spouse (Lois Bilberry); nieces, Corinne Bilberry-West, Robyn Bilberry and Rosalyn Smith (Donnie Smith); nephews, Marcus Gupton Michael Dubose, Abdul West and Khadijah Hemphill-West; grand nephews, Jordan Thompson, Gabriel and Jacob Asika, and a host of cousins, friends and associates. Debbie will be missed, though, we will celebrate her life and her ascension to everlasting peace, love, and holiness. Livestream link to the service on 9/15/2021 starting at 12:45pm for the 1:00pm service: https://vimeo.com/604148710/3716cce502

Deborah Renee Bilberry-Dixie was called home by the Lord on Monday, August 30, 2021. Deborah, who was affectionately called Debbie by her family and friends, was born on April 8, 1954 to Charley Henry Bilberry Jr. and Lillie Mary Smith Bilberry.... View Obituary & Service Information

The family of Deborah Renee Bilberry created this Life Tributes page to make it easy to share your memories.

Deborah Renee Bilberry-Dixie was called home by the Lord on Monday,...

Send flowers to the Bilberry family.