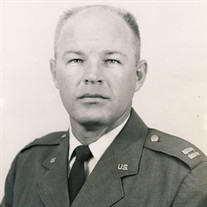 David Edward Lee Verble, 87, passed away peacefully on November 29, 2021 near his home in Victorville, CA. David was born on February 25, 1934 in Beaumont, Texas to Laura Marie McAnelly and Ottis Tobias Verble. He grew up in Beaumont, Texas where he attended South Park High School and then graduated from Texas A&M University in 1956 with a BSME. David married Joyce Ann Derrington of Beaumont, Texas in 1956, and began a distinguished career with the U.S. Air Force that lasted 24 years. During his career, David was awarded the Distinguished Flying Cross and the Legion of Merit, which spanned some 3,700 hours in the air and in management rolls in space and missile systems development and operations. During this time he and Joyce raised three daughters over several assignments, including England, France, California and Hawaii. David also served a year of deployment to Vietnam in 1965 during the Vietnam War. After retiring from the U.S Air Force as a Command Pilot Colonel, David’s second career in the Aerospace industry lasted 15 years. He retired to Sun City West, Arizona in 1995 with his second wife, Sharon Verble, where he spent most of his time volunteering with the Sun City Area Historical Society and the Del Webb Museum where he was involved with various building and restoration projects. David’s hobbies included golf, woodworking and metal working, cooking, and he was a sports enthusiast as well. David is survived by his wife, Sharon Verble, brother Larry Verble, three daughters Kathy Tiampo and her husband Michael Tiampo, Tobey Kamaka and Kerry Miller, nephews and nieces, seven grandchildren and six great-grandchildren. Funeral services are scheduled for _Tuesday, December 21, 2021 at 12:00 pm to be held at Riverside National Cemetary 22495 Van Buren Blvd, Riverside, CA 92518. A reception will follow at Rancho Caballeros Mobile Home park in the Clubhouse at 1:00 p.m. located at 15181 Van Buren Blvd, Riverside, CA 92504.

David Edward Lee Verble, 87, passed away peacefully on November 29, 2021 near his home in Victorville, CA. David was born on February 25, 1934 in Beaumont, Texas to Laura Marie McAnelly and Ottis Tobias Verble. He grew up in Beaumont, Texas... View Obituary & Service Information

The family of Col. David Edward Lee Verble created this Life Tributes page to make it easy to share your memories.

Send flowers to the Verble family.