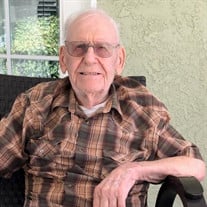 Clyde Edwin Smith Born May 25, 1924 to John and Edna Smith in Santa Ana Ca. Survived by his sister Arlene Crawford and Judy Royer and brothers Gary Smith and Terry Smith who proceed him in death. He married Bonnie Fuller May 16, 1946, who preceded him in death, November 17, 2010. They had five children: Daniel L. Smith, deceased, spouse, Connie, Marsha L. Lyvers, spouse, Joseph, Steven A. Smith, spouse, Nedra, Phillip A. Smith, spouse, Margaret, Lynette R. Winans, spouse, Rick, 13 Grandchildren, 25 Great Grandchildren, 5 Great-Great Grandchildren. From early childhood he was influenced by a grandfather, father, and uncles to follow in their footsteps as a farmer. Having formed a passion for farming and a work ethic superior to most and only matched by a few, he became a premier farmer and master of many related trades. He was sought after by many for wisdom and insight into the world of food production, a reflection of his passion. From his late teens and early twenties, he grew a variety of crops. His greatest focus was that of raising potatoes, a staple for many years. In addition, he grew grain, onions, alfalfa, corn, sugar beets, and other forage crops. This great passion of his was honored by him meeting his beloved Bonnie in a potato field while harvesting, “hand-picking”, for his grandfather, John W. Smith. The II World War having ended, he married his beloved Bonnie, and started raising his family in Nuevo, Ca. Farming, family, and his church, Nuevo Community Missionary Church, were the centers of his life. If you were looking for Clyde Smith, he could most often be found in one of those three places. Although a man with a limited education (8th grade), he was a very intelligent individual with a quick mind, ready to tackle most any problem with the attitude of “never let a problem be bigger than you”. Many admired his tenacious appetite for engaging in the near impossible, if not the fully impossible, task with that dictum for success as his motivation. That not only applied to his personal problems, but he would extend himself to others desiring to aid them in solving their problems as well. He was known as a generous individual by many sharing his good fortune of the late 50’s and early 60’s with others. In later years he fell on hard times, a shared dilemma by the farmers in the area, yet he continued to face the demise of agriculture with focus and determination. Even in his late eighties he stood the storm often with odds greatly against him. He was only deterred by the long standing illness of his wife, Bonnie, pushing him to leave the major operation of the farm in the hands of a trusted friend, Don Bean. From that time on he focused his attention on the care and welfare of his wife until she passed on November 17, 2010. In 2018 he fell and suffered an irreversible injury which made it impossible for him to remain under his own care. He was placed at Pacifica Senior Living of Hemet, an assisted living facility where he remained until his passing on October 22, 2021. While there he was beloved by all, staff and resident alike, treating them with equal love and respect. He would often make nick-names up for the staff to reflect what they meant to him. He had terms of endearment for just about everyone. For the final five months of his life he was under the care of hospice, being given care by folks he didn’t know. Even while realizing his time was short he always had a smile and was compliant with just about everything. Everything except taking pills, which he hated until the very end. He would frown and let it be known he “wasn’t going to take that crap”. However, he had such a great relationship with everyone, he would relent or be tricked into taking those hated pills anyway. Truly a comedy to experience. 97 Years is no short lifetime. Clyde Smith was born in the middle of the “roaring 20’s”; lived through the “great depression”; couldn’t serve during II World War because of an injury that kept him from doing so, but grew food for the troops that did go; saw the Korean and the Viet Nam wars come and go, always growing food for the military; raised a family of merit with his life-long companion, Bonnie; including himself there were five generations of his legacy alive at once; and finally, he finished with a smile on his lips and a desire in his heart to see Jesus and his beloved Bonnie. Clyde E. Smith May 25, 1924 to October 22, 2021 For more please visit - ClydeESmith.life

Clyde Edwin Smith Born May 25, 1924 to John and Edna Smith in Santa Ana Ca. Survived by his sister Arlene Crawford and Judy Royer and brothers Gary Smith and Terry Smith who proceed him in death. He married Bonnie Fuller May 16, 1946, who... View Obituary & Service Information

The family of Clyde Edwin Smith created this Life Tributes page to make it easy to share your memories.

Send flowers to the Smith family.