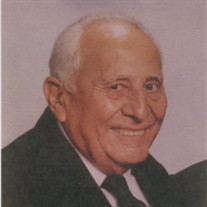 Augustine Martinez, age 92, passed away on Wednesday, October 27th in San Antonio, TX. He was born on April 07, 1929 in Terminal Island, California to Augustine and Eufrosina Martinez. He began his career at a French Sardine Cannery before serving in the US Armed Forces as a Combat Construction Specialist in the Korean War (1951-1953). After his military service, he returned to California and worked at the Star-kist Tuna Cannery, where he met the love of his life – Maria. He married her on June 12, 1955 and stared forming a family in Wilmington, CA. He went on to serve as a Longshoreman for 23 years, then retired. Augustine took great pride in serving as life-long member of the Knights of Columbus Honor Guard. He was a 3rd Degree member of Council 9986 in Perris, California and a 4th Degree member of Assembly 1733 in Hemet, California. Augustine Martinez was the model of service – to God, country, and his family. He never missed the chance to tell a war or boxing story, to sing along with the mariachis, or to pull you out onto the dance floor. He was fondly referred to as “Grampy” by everyone he met, and will be dearly missed. He was preceded in death by his beloved bride, Maria Luisa Martinez; his brother Angel and his sisters Ofelia, Socorro and Carmen; his daughter, Elizabeth “Lisa” Martinez; and his granddaughter, Cynthia Martinez. Augustine Martinez is survived by his children, daughter Dianne Benavides (Alvaro); son Augustine Martinez (Alana); and son Richard Martinez (Donna). He is also survived by his grandchildren Ericka Olivarez (Christopher), Francisca Perez, Tanya Estes, Vennessa Martinez, Julie Davidson (Scott), William Palmer, Marcus Benavides, Megan Carbajal (Jared) and Augustine Martinez, Jr.; as well as by his great-grandchildren (in alphabetical order): Analeese, Caleb, Christopher, Edward, Eli, Elian, Gabriel, Hannah, Isabella, Issac, Jaykob, Madeline, Rachel, Ryder, Savanna, Wyatt and Zechariah.

Augustine Martinez, age 92, passed away on Wednesday, October 27th in San Antonio, TX. He was born on April 07, 1929 in Terminal Island, California to Augustine and Eufrosina Martinez. He began his career at a French Sardine Cannery before... View Obituary & Service Information

The family of Augustine Martinez created this Life Tributes page to make it easy to share your memories.

Send flowers to the Martinez family.