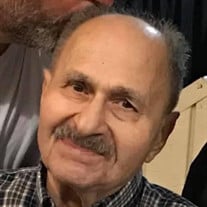 Ara Sagherian ("Poppy"), 91, of Moreno Valley died in his Yucaipa home on April 1, 2021, where he spent the last six years of his life living with family. Ara was the doting husband of his late wife, Angelina Rita Sagherian. Born November 20, 1929, in Bronx, NY, he was the son of the late Melkon and Takouhy (Pashalian) Sagherian, survivors of the Armenian genocide. After completing the 10th grade, Ara served in the United States Navy for 4 years, 2 months and 13 days and was honorably discharged in 1955. Ara worked in construction, at the docks, and as a small retail store owner in his younger years and retired at the age of 75 from the U.S. Postal Service after many years as a groundskeeper. Ara worked hard and he worked smart. He married his beautiful wife in 1974 after a 15 year courtship and, instantly, her family was his family and the love he had for their grandchildren was immeasurable. The two were inseparable until her death in 2015. Nobody was a stranger to Ara. He was a social man, adored by many, and one who would go out of his way to make sure people knew they were loved and appreciated. His compassion and attention to detail would solidify his genuine caring. Many would agree that there was truly no man as gentle and forgiving as Ara. Ara is survived by his wife's children, Steven (m. Suzann) and Jeri Lynn (m. Hugh); their 10 grandchildren, Steve (m. Sandi), Scott Mack, Rachael (m. Tony), Cade (m. Laura), Angela (m. Brandon), Nicole, Faith (m. Ryan), Theresa, Scott Jacobs and Sean; their 18 great-grandchildren, Hannah, Michaela, Rebecca, Allison, Samantha, Charlissa, Gabriel, Ezekiel, Caitlyn, Nikiya, Madison, Peter, Jacob, Angelica, Jackson, Ryan, Savannah and Christian; their great-great grandson, Brandon Tyler; his nieces and nephews, Joan, Joyce (m. Robert) and Greg (m. Linda) and great nieces and nephews, Nicholas, Mikayla, Jiray and Mackenzie. He was also preceded in death by his brother, Hagop (Jack) Sagherian and sisters, Sirpouhie Bashian and Araxy Avedisian. Services are being held Thursday, April 22, 2021, at 11 am at St Frances X. Cabrini Church. 12687 California St., Yucaipa, CA 92399. In lieu of flowers, donations may be made in Ara's memory to: Msgr. Tom Wallace, Missions Office, Diocese of San Bernardino, 1201 E. Highland Ave, San Bernardino, CA 92404.

Ara Sagherian ("Poppy"), 91, of Moreno Valley died in his Yucaipa home on April 1, 2021, where he spent the last six years of his life living with family. Ara was the doting husband of his late wife, Angelina Rita Sagherian. Born November 20,... View Obituary & Service Information

The family of Ara Sagherian created this Life Tributes page to make it easy to share your memories.

Ara Sagherian (&quot;Poppy&quot;), 91, of Moreno Valley died in his Yucaipa...

Send flowers to the Sagherian family.