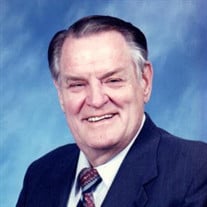 In Celebration of a Very Special Life ALLEN ERNEST ALDRIDGE, age 91, of Sun City, California went home to be with the Lord on May 9, 2021. Born March 26, 1930, in London, Ontario, Canada to Bernard Ernest and Margaret Ruth (nee: Allen) Aldridge. The family subsequently moved to Toronto and eventually to Wheaton, Illinois (near Chicago) when Allen was 18. As the oldest of the four children, Allen took on several responsibilities to help the family in whatever way he could. It was in Wheaton where he met Elizabeth Jean Dewar. They were married on May 27, 1950, and started a family with the births of David (1951), Robert (1953), and Bruce (1955). In 1960, the family moved to Southern California where Allen worked as an engineer in the refrigeration industry for many years before retiring in 1992. Allen and Jean were married for 67 years when Jean passed away in May of 2017. Love for God and family were Allen and Jean’s passions in life. Both truly had “servant’s hearts” and they were active in the Church and in other Christian ministries throughout their lives. Their work at the Menifee Bible Church included serving for many years as a Deacon and a Deaconess. They made countless trips with clothing and supplies in support of the Tecate Mission in Mexico. They also made weekly “bread runs” to supply needy families with free baked goods. Allen’s many repair jobs at the Church earned him the nickname of "Mr. Fix-it". Allen loved Christian music, while travel, photography, and fixing antique clocks were a few of his hobbies. Allen (and Jean) always took pleasure in finding a bargain at a garage sale. Yet while being frugal as to their own possessions, they were extremely generous as to both gifts and service to others. Many happy memories were created due to their generosity and efforts to keep close contact with family and friends, including taking the entire extended family on cruises to celebrate their 40th, 45th, and 50th anniversaries. Allen leaves behind three sons and three daughters-in-law to honor his memory by carrying on his life values: David (Nancy), Robert (Dawn), and Bruce (Debbie). He was also blessed with 10 grandchildren and 14 great-grandchildren. Allen prayed daily for family and those in need and was truly an example to us all. We were all blessed to have him in our lives and miss him so very much already! The family requests donations to Tecate Mission International, P.O. Box 1000, Tecate, CA 91980 (619) 468-3355, in lieu of flowers.

In Celebration of a Very Special Life ALLEN ERNEST ALDRIDGE, age 91, of Sun City, California went home to be with the Lord on May 9, 2021. Born March 26, 1930, in London, Ontario, Canada to Bernard Ernest and Margaret Ruth (nee: Allen) Aldridge.... View Obituary & Service Information

The family of Allen Ernest Aldridge created this Life Tributes page to make it easy to share your memories.

In Celebration of a Very Special Life

Send flowers to the Aldridge family.